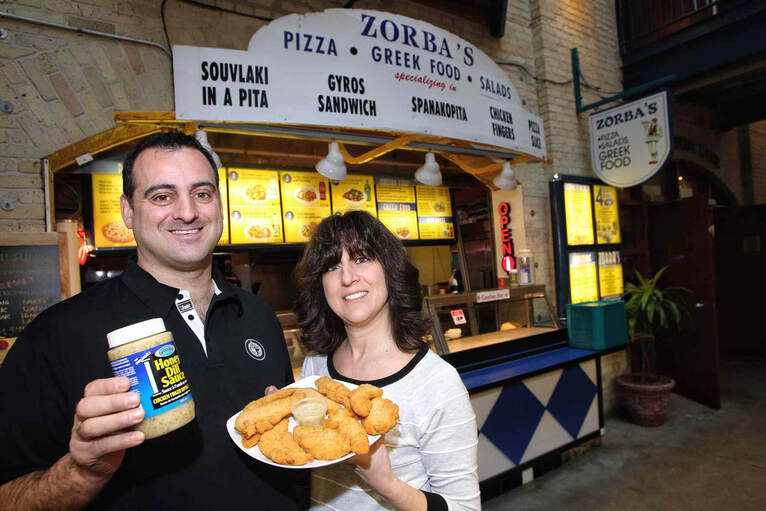 A Manitoba mistake: Honey dill sauce is strange and it's zesty... and it's ours

In the 1970s, Leonard Nimoy hosted a television show called In Search of...

Every Saturday night, Nimoy would try to unravel the mysteries of life, such as the Loch Ness Monster, Bigfoot or the popularity of Three's Company. Today, we take a leaf out of the ex-Vulcan's book as we turn our attention to honey dill sauce, a foodstuff that is prevalent in Manitoba but -- cue eerie music -- an enigma almost everywhere else in the world.
How's this for a honey boo-boo?

Shirley Eng is the owner of Mitzi's Chicken Finger Restaurant, a downtown institution that, on a routine basis, ships orders of its namesake dish to ex-pat Winnipeggers across the country. About 30 years ago, Shirley and her husband Peter were out for dinner when their waitress brought them a dipping sauce they weren't familiar with.

A week later Peter, who passed away 12 years ago, headed into the kitchen to see if he could duplicate that same sauce. He wasn't successful -- Peter hadn't asked what the ingredients were and was simply winging it -- but Shirley liked one of his "failures" so much she began featuring it at Mitzi's, alongside her chicken fingers.

"It was a mistake; he was trying to make a different sauce and he ended up making our honey dill (sauce) instead," Shirley says. "All the time we get out-of-towners asking, 'What is it?' I tell them it's an acquired taste, kind of like our weather."

Emma Durand-Wood moved to Winnipeg from Vancouver in 2008. It didn't take long for Durand-Wood to notice Winnipeggers' eccentricities, among them an affinity for socials and a penchant for referring to KFC as Champs. One day, Durand-Wood was discussing her observations with two other Wet Coast transplants. All three agreed they weren't in Kansas, err, B.C. anymore.

They decided to construct a stranger-in-a-strange-land-style blog titled Peg O' My Heart that would document the unique characteristics of their new home.
Durand-Wood, who grew up enjoying chicken fingers served with plum sauce, can't recall the precise moment she first encountered honey dill sauce. All she remembers is spotting it everywhere she went. And that it looked "repulsive."

"Why would you take three ingredients -- honey, mayonnaise and dill -- that are delicious on their own and combine them into a creepy-looking sauce?" she wondered.

In April 2009 Durand-Wood posted a blog entry about honey dill sauce that concluded, "I just don't get it. I really want to embrace Manitoba 'things' but this is one I just can't get into. Manitoba, you're so sweet and quaint and in touch with what matters in life... except when it comes to your chicken finger sauces."

It didn't take long for Peg O' My Heart's comments section to light up. Observations ranged from "Honey dill sauce is one of the foods I'm looking forward to most when I move back to Winnipeg..." to "I don't even eat chicken fingers unless I'm back in Winnipeg because I only want them WITH honey dill sauce..." (Not everybody was drinking the Kool-Aid; an Albertan who transferred to Winnipeg to attend university wrote: "I was in residence at the U of M and everyone was really excited about chicken finger night. I became excited, too, until they handed me some very strange, coloured mush to dip them in.")

OK, so maybe Durand-Wood hasn't joined a Facebook group devoted to honey dill sauce (531 likes!) but she has changed her tune, somewhat; nowadays when she prepares chicken fingers for her husband and three-year-old, she whips up a batch of honey dill sauce to go with them, she says.

"After I wrote the post I kind of put it out of my mind for a while but one day I was like, maybe I'll give it another try. It's kind of grown on me to the point that I would now say I'm a fan."

Zorba's Pizza has been a tenant at The Forks Market since the tourist mecca opened in 1989. Since Day 1, the take-out spot has served chicken fingers paired with a homemade honey dill sauce. And since Day 1, patrons have asked for an extra container of sauce to bring home. "The recipe was my dad's," says John Iliopoulos, who used to manage another Zorba's location at Grant Park Shopping Centre.

"He ran the restaurant for years and his work ethic was you don't buy anything -- you make it yourself and keep improving on it till you get it right."

Iliopoulos is the president of Greetalia Food Products, a 15-year-old Winnipeg company whose top seller is its "world-famous" honey dill sauce. Iliopoulos knew he had a hit on his hands a few weeks after launching his product, which is based on his father Jim's recipe and made using honey from Gilbert Plains.

"We were doing a lot of in-store demos and I was getting calls from store managers telling me they were running out," Iliopoulos says, noting Greetalia was the name of another restaurant his family used to run. "So I was out there schlepping cases at a moment's notice on Saturday afternoons - doing whatever I had to do to make things work."

The fact honey dill sauce hasn't caught on elsewhere the way it has in Manitoba hasn't been for a lack of trying on Iliopoulos's part. He used to distribute as far west as Alberta but he's not Kraft Canada, he says, and it takes a lot of resources for "a little guy" to stock store shelves thousands of kilometres away from Greetalia's main plant in Portage la Prairie. (Seven years ago, President's Choice introduced its own honey dill sauce -- the only competition Iliopoulos has ever known - but the chain discontinued their version after just 10 months because of poor sales everywhere but Manitoba.)

"I think the biggest problems are familiarity and marketing. When people don't know what a product is or what foods to serve it with that makes it a bit of a tough sell," says Iliopoulos, who has heard of people pairing his honey dill sauce with french fries, salmon, roasted carrots and -- "To each his own," he says with a laugh -- spaghetti.

Nowadays, Iliopoulos gets emails on a regular basis from ex-Winnipeggers wondering how they can get their hands on a jar or three.

"Just recently I shipped a batch to a lady in New Brunswick. When people are going out of their way to track something down, that tells me lots of positive things about it."